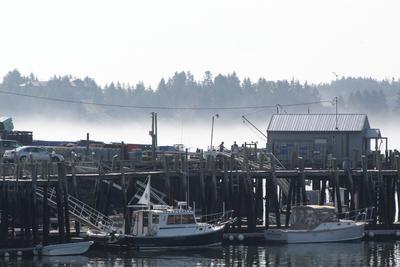 The fog creeps in at Stonington Lobster Co-op II at the end of Atlantic Avenue on the morning of August 24.

Maine’s lobster industry last week got a bit of a break—two breaks, actually—with developments from Washington.

First, on August 19, Federal District Judge James Boasberg refused to shut down the lobster fishery as many feared he would. Environmentalists had asked him to do so while the National Marine Fisheries Service comes up with new rules to protect the endangered North Atlantic right whale.

Two days after the judge’s ruling, the Trump administration announced it had made a mini-trade deal with the European Union to remove tariffs on lobsters for the next five years.

“We’re on a roll,” said David Sullivan, representative for the Maine Lobstering Union, in a phone interview.

Paul Anderson, executive director of the Maine Center for Coastal Fisheries, said in an email those two developments were good news for lobstermen. They haven’t had much lately. The COVID-19 pandemic depressed lobster prices by shutting down restaurants, casinos and cruise ships.

“The overall market conditions for lobster are still in flux,” Anderson said. “But we’re still fishing, the shedders are now in the condition that they can be shipped, and domestic consumption and local processing are happening. The price is still low, but it ticked up a bit in Stonington this week.”

Judge Boasberg had ruled in April that the National Marine Fisheries Service violated the Endangered Species Act by failing to protect right whales from entanglement in fishing gear.

Then in Phase II of the court case, environmental groups asked Boasberg to give the NMFS a January 31, 2021, deadline for a new rule protecting right whales. That would have closed the lobster fishery the next day, according to a statement by Patrice McCarron, executive director of the Maine Lobstermen’s Association.

“We are thrilled that the court will not shut down the lobster fishery,” McCarron said.

Both the Maine and Massachusetts lobstermen’s associations and the Maine Lobstering Union presented evidence in Phase II of the case, something they couldn’t do in the first phase.

Maine lobstermen maintain that they don’t see right whales in the Gulf of Maine. A recent YouTube video made the rounds locally on Facebook, claiming to show a right whale in Blue Hill Bay that fishermen nicknamed “Old Tim.”

Sullivan, of the Maine Lobstering Union, said he looked at the video and saw no lobster buoys near the whale, whereas Blue Hill Bay is full of buoys.

Boasberg acknowledged the environmentalists’ concern that seven right whales were found dead in an area off Nantucket and several entangled over the last three years. But, he noted, “whales can apparently drag fishing gear for months (and thus presumably many miles) before succumbing.”

Lobstermen also argue that ship strikes kill more whales than fishing gear. “There are no cruise ships coming out of Canada [now], and there are no whale deaths,” Sullivan said. “If that doesn’t say it all.”

Boasberg also refused to close the area off Nantucket to lobster fishing year-round, as environmentalists had asked. He said the area was “roughly the size of Connecticut” and would increase the density of fishing gear outside the closed area. That, he said, could present more of a danger to right whales.

The judge acknowledged that closing the fishery would harm lobster fishermen and threaten the survival of their communities.

“The COVID-19 pandemic has gutted the market for lobster, cutting the price in half and pushing fishermen, most of whom are self-employed, to the economic brink,” wrote Boasberg.

U.S. Rep. Jared Golden (D-Maine) said he wouldn’t mind trying to change the Endangered Species Act. “It’s not that I’m against efforts to conserve land and animals,” he said during a recent interview. But, “unlike the other environmental laws, there’s no economic impact analysis that weighs the damage to a community.”

On August 21, EU governments still have to agree to the deal, which also lowers U.S. tariffs on European cigarette lighters and certain kinds of crystal glassware.

“The EU tariff reduction is a massive win for Maine Lobster,” said Hugh Reynolds, owner of Greenhead Lobster of Stonington, in an email. “The EU will provide good opportunity on the other side of COVID.”

Sullivan called it “another big win for the Maine lobster industry, but mostly for the dealers, not the fishermen.”

The dealers, he said, were always at a 50-cent-per-pound disadvantage with the European Union. “It’ll definitely put us on a better playing field with them,” he said.

However, the European markets may take time to open, Anderson said. “Because of COVID, there is very little air travel going from [the] U.S. to [the] EU right now, so that opportunity will need time to reemerge and will depend on how the COVID situation resolves.”