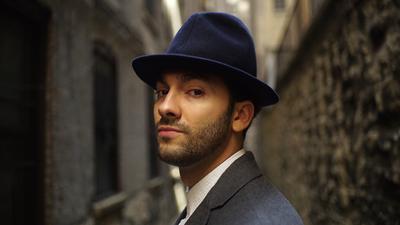 The Deer Isle Jazz Festival kicks off Friday, August 3, with a vibrant evening soaked in the rhythms of Afro-Cuban jazz with David Virelles and Román Díaz.

On Friday, August 3, pianist David Virelles performs in duo with acclaimed master percussionist Román Díaz for a concert soaked in Afro-Cuban folkloric tradition as re-imagined for the 21st century.

Virelles absorbed Afro-Cuban cultural traditions in his native Santiago, Cuba, attended the island’s storied classical conservatories, and then fell in love with jazz masters such as Bud Powell and Thelonious Monk. His frequent collaborator is Román Díaz, a master percussionist from Havana.

On Saturday, August 4, Myra Melford’s Snowy Egret quintet takes the Opera House stage. For more than two decades, Melford has been among jazz’s most accomplished and daring pianists and composers.

The Saturday night concert will have an opening set with a backstory. Drummer Joseph Boulet is a graduate of George Stevens Academy who last appeared on the Opera House stage in the 2015 Jazz Festival as part of the GSA opening act. At that concert, Boulet connected with acclaimed multi-insrumentalist Peter Apfelbaum, who was performing with Dafnis Prieto’s headlining act. The two have become close friends and collaborators. Now, three years later, they bring a special set to the stage.

Tickets can be purchased online, by phone, or in person at the Opera House Box Office, at the corner of Main and School streets in downtown Stonington (Monday-Friday from 11 a.m. to 5 p.m.). To purchase tickets online, or for further information and a full schedule of events, including ticket prices, visit operahousearts.org.